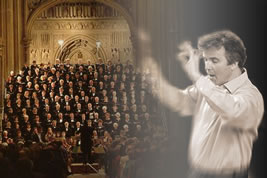 “Canterbury Choral Society is one of those substantial choruses in Britain that can tackle the biggest works in the repertory with absolute confidence”.

This was the opening of the review in the online classical music magazine “Music and Vision” following the performance of Elgar’s The Apostles in January this year which marked a major departure for the choir, singing together with The Philharmonia Orchestra, and recording the concert live for this CD.  The Society performs four major concerts in Canterbury Cathedral every year, hosts Family Carols at Christmas, and takes great pride that Canterbury Festival has invited it to perform a major concert each year since the Festival’s launch in 1984.

On four occasions the Society has performed in cities in northern France, including Verdi’s Requiem in 1990 for the City of Boulogne as the opening concert of the “Britain in Boulogne” arts festival, and, following the 1997 Canterbury Festival performance of Mahler’s Eighth Symphony, repeat performances in the Royal Albert Hall and two in Lille as part of the Lille Festival.  The 1999 concert of Berlioz’s Grande Messe des Morts with the Royal Choral Society and Royal Philharmonic Orchestra was also followed by a performance in the Royal Albert Hall.

Richard Cooke has been conductor of Canterbury Choral Society for over 20 years, and covers a wide repertoire during their concert season in Canterbury Cathedral.  He has appeared in the cathedrals of Peterborough, Winchester, Salisbury, Norwich, St. Edmundsbury and Rochester, and in the concert halls of London, Birmingham, Manchester, Liverpool, Belfast and Dublin.

He has conducted the RPO, LPO, Philharmonia, BSO, RLPO as well as the London Handel Orchestra, and recorded Orff’s Carmina Burana with the RPO, and the Ultimate Last Night of the Proms with the RPO and Canterbury Choral Society. He has appeared with the Gothenburg and Helsingborg Symphony Orchestras, the Opera de Lyon and Orchestra National de Lille.

Richard Cooke had an Honorary Doctorate conferred on him by the University of Essex in 1996 in recognition of his work for the musical life of the University over 15 years.