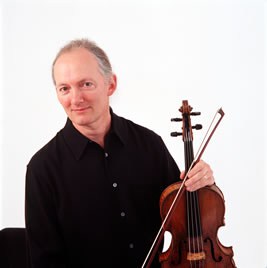 Robin Ireland was born in 1954, son of viola player Patrick Ireland and pianist Peggy Gray. He was a chorister at St Paul’s Cathedral Choir School and read music at Cambridge University. After further study in America, he had a short spell as leader of the Las Palmas Symphony Orchestra. He subsequently became a founder member of Domus, which toured with its own portable concert hall as well as having great success in more conventional venues.

Robin is especially renowned as viola player of the world-famous Lindsay String Quartet, with whom he played for twenty years until the groupâ€™s decision to disband in July 2005. The Lindsays recorded nearly all the major quartet repertoire, gave numerous first performances of new works, including Tippett’s fourth and fifth quartets, and were favourites with audiences around the world for the intensity and spontaneity of their playing. Robin is also an experienced soloist and has appeared with the Liverpool Philharmonic Orchestra and the London Mozart Players. He has broadcast on BBC Radio 3 and has given many recitals, often featuring transcriptions for viola of Bach’s unaccompanied works for violin and cello.

Since 1999, composing has become an increasingly important part of Robin’s life. He was commissioned by Sheffield University to write a string quartet for its 2005 centenary celebrations. This work features on a CD alongside Pairings, his three duos, for viola and cello, two violas, and violin and viola, released on the Meridian label in September 2005.

Robin is a committed and enthusiastic teacher of viola. He was a part-time lecturer in Manchester Universityâ€™s Music Department for 20 years, and has given talks and seminars in both Manchester and Sheffield. He is an experienced chamber music coach and masterclass tutor, and is skilled at leading groups experimenting with improvisation. As a writer, he has contributed to the BBC Music Magazine.

Robin plays on an Amati viola made in Cremona in 1630. He is married to Nerissa Kisdon, who is an Alexander Teacher. They have three sons.