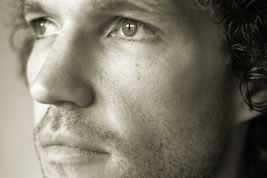 Cello playing is at the centre of Matthew Barley’s uniquely eclectic career, while his musical world has virtually no geographical, social or stylistic boundaries.

Matthew made an early London concerto with the Shostakovich Cello Concerto in the Barbican Hall with the London Symphony Orchestra, as finalist of the LSO-Shell Competition. Since then his solo and chamber music engagements have taken him to most European countries, North America, the Middle East, India, the Far East, Australia and New Zealand, performing repertoire ranging from Bach to his own compositions, music written for him and improvisation. Matthewâ€™s recent concerto engagements include the London Sinfonietta, the Orchestra Internazionale dâ€™Italia, the Royal Scottish National Orchestra (Marin Alsop), Brno Philharmonic, Hong Kong Sinfonietta, Buenos Aires Philharmonic, Athens Camerata and New Zealand Symphony Orchestra (Tan Dun). Recent festival appearances include Lucerne, City of London, Prague Autumn, Hong Kong, St.Denis in Paris, Harrogate, Lichfield, Salisbury, Cheltenham, Dijon, Koshigaya (Japan), WOMAD in Australia and a residency at the New Zealand Arts Festival.

Future projects include recitals at the Wigmore Hall in London, Krakow’s Sanctum-Profanum Festival, and Seoul’s Kumho Hall. Matthew will also go on a Europe-wide tour with the Netherlands Dans Theatre with Brett Dean’s ballet with solo cello, One of a Kind, and mastermind a major project with Viktoria Mullova which will tour the UK, culminating in a BBC Prom concert at the Royal Albert Hall.

Matthew is well know for his successful collaborations with a huge range of artists from outside the classical music world –  Matthew’s most recent collaboration is with star Indian sarod player Amjad Ali Khan, with whom he has appeared in duo recitals at London’s Royal Festival Hall (2000 and 2002), at the 2003 WOMAD Festivals in Adelaide (Australia), Wellington (New Zealand) and Reading (UK), at the St Denis Festival in Paris, as well as in Calcutta and Mumbai in India.

Matthew’s debut recordings, The Silver Swan (multiple cellos) on the Black Box label and Strings Attached (with classical Indian musicians) on the Navras label, were both released in September 2003.

In 1997 Matthew founded Between the Notes, a performance and education group which works with music and combined arts. Since then Between the Notes has been involved in major projects at the Lichfield Festival, the Sydney Opera House, London’s Royal Opera House (with the Royal Ballet), the International Symposium of Contemporary Music in Hong Kong, and on tour in Bangladesh, Cyprus, Greece, Spain, Belgium Croatia and Germany. Their first album, Knots, was released in July 2005 on the Black Box label.