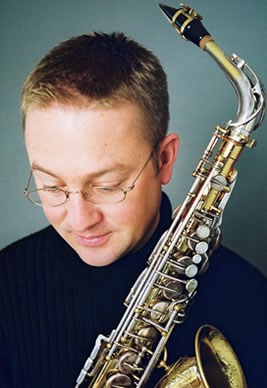 Rob Buckland is internationally acclaimed as one of the leading Saxophonists of his generation, equally at home in the world of classical music and jazz.  Appearing as concerto and recital soloist, in duos with pianist Peter Lawson and percussionist Simone Rebello, and with the Apollo Saxophone Quartet, Rob performs throughout the UK, Europe and Japan.

He has commissioned and recorded music from many of today’s leading composers, featuring on his own solo CD and four CDs with the Apollo Quartet.

He has commissioned Concertos from Michael Ball and Graham Fitkin, and solo works from Roy Powell, Nikki Iles and Andy Scott (featured on this CD).

Rob spends much of his time performing with the Apollo Saxophone Quartet, a world class ensemble that is widely acknowledged as one of the UK’s finest contemporary chamber ensembles.  The quartet records and tours extensively both in the UK and abroad, performing commissioned music from some of today’s finest composers, such as Michael Nyman, Michael Torke, Richard Rodney Bennett, Graham Fitkin and Django Bates.  Rob has also composed several works for the Quartet as part of the group’s projects with Silent Film and Poet Lemn Sissay and a series of original compositions for young players (solos, duets, quartets and a new book of easy pieces for Saxophone and Piano published by astute music ltd).

Alongside his busy performing schedule, Rob is Professor of Saxophone at the Royal Northern College of Music in Manchester and runs his own International Saxophone Summer School.