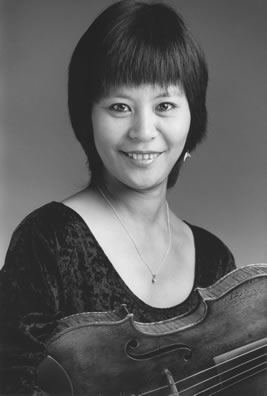 Winner of the 17th Budapest International Viola Competition, Yuko Inoue has performed as soloist throughout Europe and Japan with many orchestras, including the Hungarian State Philharmonic Orchestra, the HallÃ© Orchestra and the Netherlands Chamber Orchestra and with such eminent musicians as Gidon Kremer, Sir Charles Groves, Gyorgy Pauk, Jean-Jacques Kantorow, Heinrich Schiff and Thomas Zehetmair.

Yuko Inoue was born in Hamamatsu, Japan and studied with Nobuko Imai at the Royal Northern College of Music in Manchester.  After graduating with Distinction, Miss Inoue was appointed principal viola of the Netherlands Chamber Orchestra, a position she held for three years before returning to live in London.  She is in great demand as a soloist and chamber musician, performing and recording frequently with Britain’s most eminent string quartets and chamber ensembles and in festivals such as Lockenhaus, Kuhmo, Cheltenham, Bath and Aldeburgh.  She is a member of the Fibonacci Sequence Ensemble based in London.

Her CD, Romanze- the Romantic Viola, with pianist, Kathron Sturrock, was voted one of Classic CD magazine’s “Choices of the Month” in August 2000 and was also praised with similar enthusiasm from The Strad, Gramophone and AMAZON.

Miss Inoue has appeared as guest principal with several orchestras including the Philharmonia Orchestra, English Chamber Orchestra and the London Sinfonietta.  She is a professor at the Royal Academy of Music in London and gives masterclasses throughout Europe and Japan.

Miss Inoue plays on a viola by J. B. Vuillaume, kindly on loan from Mr. J. Sanderson.